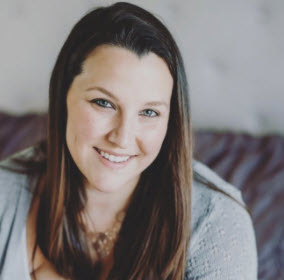 I’ve always known that women are powerful. My older sister, Kelly, is 13 years older than me – growing up, she was everything I wanted to be:  funny, tough, confident, driven, and she cultivated confidence in my younger sister, Paige, and me.  Growing up in the 90s, Kelly’s anthem was ‘Ain’t Nuthin’ But a She Thing’ by Salt n’ Pepa– and she blared it 24/7 for us.  30 years later, I can still sing every word of that song.  It is a song about the strength of women, strong women empowering one another.

Pause & go listen to it – tell me if you don’t cry a little! Seriously. Do it.

Kelly’s confidence and her passion for equality for women wasn’t an accident.

When she was small, my mom was a single parent – and a powerhouse.  Mom demands respect – and was maybe branded ‘too aggressive’ – we’ve heard that before, right ladies?  But she raised three girls to never think we had limitations on what we could achieve.  My mom allowed me to just be me – and celebrated it the entire way.  She is the person you want to have in your corner, the staunchest advocate and fiercest ally.  And it’s all backed by love.  She taught me women can be loving, maternal AND fierce.

I fell into hospitality.  It wasn’t a path I expected to go down, but like many of you – once I was in, I was hooked.  Along the way I had women who empowered me.  I could write a paragraph each about Karen, Susan, Barb, and Krista.  Each are women who approach their roles with dignity, a can-do attitude – and they cared for me.  Each of them supported my growth & development and encouraged me to use my strengths.

For the majority of my career, I’ve worked for Silvia.  Not only was she my boss, she is also the founder of our THRIVE mission. Silvia has shown me to unapologetically have input, to not wait to be asked for my opinion – but to stand up & share it.

Do you remember the ‘I’m speaking…’ moment in the Vice Presidential debate?  That moment reminds me so much of Silvia.  In a lot of places, women won’t be invited to speak – and Silvia has shown me to make room for my voice – and the voice of other women.  She is a woman who lifts other women up and helps them go beyond their comfort zone.  She brings women around her to the next level, and I know that is what we will accomplish with THRIVE.  She’s taken so many chances on me, and it has shown me the power of believing in other women, and giving them the chance to grow.  Reporting to a strong female leader has made an impact on me – and it reminds me of why representation at all levels matters!

Silvia has also shown me a lot about juggling all that comes with being a working mom by choosing minute by minute what is best for you and your family, and letting others do the same with empathy and support.

That brings me to the last part of my story – which I will continue to write for the rest of my life.

I am a lucky mom to two girls, who are living in a world where there is still so much progress to be made for how we treat women.

I teach my girls autonomy over their mind and body

I teach them they can be anything

I teach them defending themselves isn’t rude

I teach them getting messy isn’t un-ladylike

I teach them that their community is everything

I teach them to surround themselves with people who bring them up, not tear them down

Women in Travel THRIVE is a proud member of the Women in Hospitality Leadership Alliance, a gathering of organizations all aligned on advancing women in hospitality.